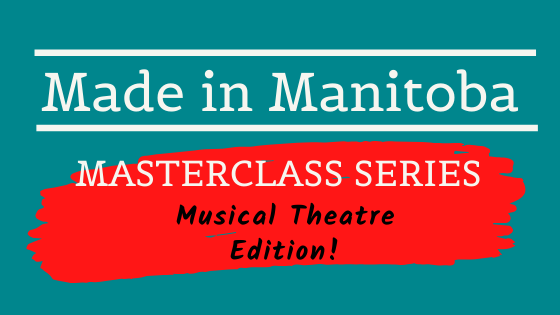 Made in Manitoba Masterclass series – Still spots left for this incredible lineup of theatre workshops. Virtual classes available for ages 12-17 and Adults over the course of 10 weeks starting June 16. #madeinmanitobamasterclassworkshop
#wpgtheatre

With a theatre-free summer on the horizon, Winnipeg Studio Theatre is kicking off a series of musical theatre masterclasses that might help you get your theatre fix.

Made in Manitoba is a new masterclass series featuring instruction by homegrown artists who have made it big on stages across the world, and it’s all available on Zoom right from the comfort of your home.

“We have a wonderful talent of skilled, brilliantly trained and active members of our artistic community, specifically in the theatre world,” says Made in Manitoba director Brenda Gorlick, “but we have a tendency to not celebrate ourselves beyond our borders.

“I want to celebrate our very own artists who are born, raised and trained here, and at the same time expose to the world that we have such a gifted and prolific number of artists coming out of our province.”

Gorlick, a choreographer and performer, is also a longtime educator, working with Winnipeg Studio Theatre on their youth training programs, many of which take place during the summer. So when COVID-19 hit, she knew she had to get creative.

“I always run a summer studio intensive and I wondered how I could emulate that on a computer screen,” she says. “We’ve all been charged with the reality that we have to reinvent ourselves and I think that’s something that artists are really good at.

“We’re giving artists a chance to share what they already know and what they have worked so hard to achieve. I want that to be an inspiration for those people who are in the process of developing.”

Starting June 16 and running Tuesdays and Thursdays until July 30, the 12-session series will touch on topics including auditions, choreography, dance technique, self-tapes, text analysis and more.

Instructors include nationally and internationally recognized artists such as Shaw Festival associate artistic director Kimberley Rampersad, Nyk Bielak (The Book of Mormon on Broadway), Samantha Hill (The Phantom of the Opera and Les Miserables on Broadway) and Andrea Macasaet, who was planning to make her Broadway debut March 12 in the musical Six.

Mere hours before the show was set to begin, Broadway was shut down in response to COVID-19, and Macasaet’s big night remains indefinitely on hold. In the meantime, the Winnipeg Studio Theatre alum will be contributing her expertise to Made in Manitoba.

“I kind of grew up with Winnipeg Studio Theatre,” says Macasaet, 26. “I was a part of their youth program, StudioWorks, at one point and then I was Christmas Eve in Avenue Q (2014) and Heather Duke in Heathers the Musical (2015).

“I’ll be teaching song interpretation for contemporary pop styles,” she says. “Not your typical musical-theatre voice masterclass. It’s going to be geared towards what you’re seeing and hearing in musical theatre now in terms of contemporary pop.”

(If you’re not sure what that entails, a quick listen to Bring it On, Legally Blonde and Waitress can get you up to speed… and don’t confuse that genre with contemporary rock musicals like American Idiot and Spring Awakening.)