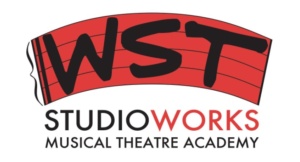 The training consists of vocal work, movement/dance components and script work leading up to our production of Be More Chill in late May. Additional rehearsals are incorporated into the schedule prior to production dates.

Classes commence in September and run until May 31st.

Please be sure to fill out both forms below!

Payments: e-transfer to studiotheatre@shaw.ca (password: Winnipeg) or by PayPal below (with the addition of a small fee)

Winnipeg Studio Theatre’s StudioWorks Academy was launched in 2004 to provide emerging musical theatre artists an outlet for intensive training. It is a two-tiered program combining in-class instruction and production work.

The StudioWorks Academy offers year-round classes in triple threat technique for students aged 11 and up (summer and fall/winter sessions). In 2020, the inaugural Made in Manitoba Masterclass series began, offering specialized musical theatre workshops to students of all ages.

The StudioWorks troupe made their theatrical debut at the Winnipeg Fringe Festival in 2004. Since then they have performed at DisneyWorld as part of the Magic Music Days program, made several tours to New York City for Broadway training opportunities and were featured at the 2017 Canada Games Opening Ceremonies.